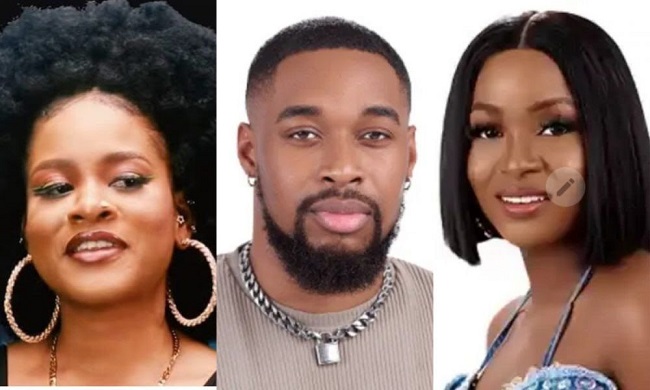 This means they will serve as Biggie’s guests and be allowed to visit the house for a week, but can no longer compete for the grand prize.

Meanwhile, Bella and Sheggz are two strikes away from being knocked out of the game, as Biggie issued them both a strike Sunday night.

Bella’s strike was due to the quarrel that made her topple a plate of rice over Rachel’s table last week. Rachel was also issued a warning by Biggie.

As for Sheggz, Biggie issued a strike for the laxity with which he handled the tail of house position.

In this week’s nominations, Bella, Sheggz, Hermes, Adekunle, Allysyn and Dotun were put up for possible eviction.

Phyna, the new Head of House (HoH) had replaced Chichi with Allysyn, using the veto power conferred by Biggie on the Head of House.

Phyna is also sharing the Head of House lounge this week with her lover, Groovy. Unlike her, Groovy is not enjoying immunity from eviction while in the HoH lounge.

Bella, Daniella and Phyna get involved in a conversation turned heated argument, Tuesday.

Daniella is quick to withdraw from the conversation, as she goes in to lie under the sheets, with Adekunle coming over to comfort her.

Sheggz steps in to confront Groovy, who he thinks should have stood up for him (Sheggz) and his babe. Groovy however refused to take sides with Sheggz.

A disgruntled Sheggz goes on to question the relationship between Groovy and Phyna. “I don’t even know why you are dating her,” he says. Groovy retorts, says Sheggz should not bother with the reason.

The drama continues to unfold this week as the level three guests, Doyin, Chomzy and Eloswag are back in the house but not partaking in the games.