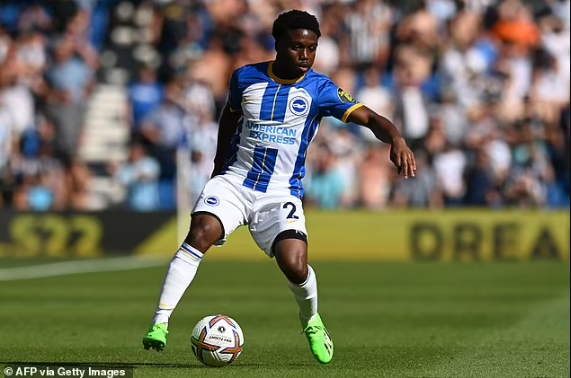 Brighton defender, Tariq Lamptey has been called up by Ghana for the first time ahead of their friendlies with Brazil and Nicaragua later this month before the 2022 World Cup in Qatar,

Lamptey, 21, had previously represented England at all levels from Under 18 to Under 21, featuring 20 times, but announced he was switching allegiance to Ghana in July.

The right-back qualifies for the Black Stars through his parents and will join up with their squad ahead of the Qatar World Cup, which begins on November 20.

Lamptey joins Athletic Bilbao forward Inaki Williams and Southampton defender Mohamed Salisu in being called up for the first time to the Ghana side.

The moves for Lamptey and Williams come as part of the plan by the Ghanaian FA and technical advisor, Chris Hughton, to recruit foreign-born players with Ghanaian heritage to play for the country.

Reports have emerged that Chelsea’s Callum Hudson-Odoi and Arsenal’s Eddie Nketiah are two other players Hughton is targeting ahead of the World Cup where Ghana face Portugual, Uruguay and South Korea in their group.

‘We have always maintained that we will not limit ourselves to only a small group of players but would scout top talents across the globe who are ready to sacrifice for the nation and take us to the next level.’