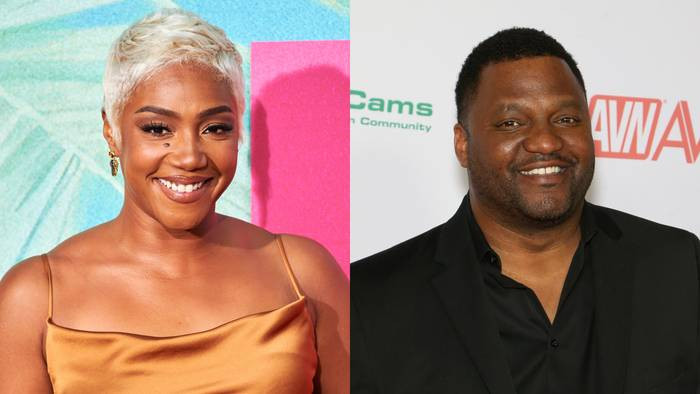 Tiffany Haddish and Aries Spears have been accused of grooming a 14-year-old girl and her 7-year-old brother, coercing them to film explicit skits.

The comedians are being sued by the siblings, identified as Jane Doe, now 22, and John Doe, now 14, in the legal docs. Jane, who is also John’s legal guardian, is the plaintiff in the lawsuit both individually and on her minor brother’s behalf.

Their mother alleges that she and Haddish, 42, met through comedy and developed a close relationship while over their respective divorces. “We were both going through a divorce,” the mother told The Daily Beast, the first outlet to report the news. “Messy, messy, messy, messy divorces… We just got really, really super, super close.”

According to the lawsuit, Haddish called the family for “every birthday and every Christmas.”

In 2013, the same year Haddish divorced William Stewart after five years of marriage — the “Girls Trip” actress appeared as a guest speaker at a summer camp attended by 14-year-old Jane.

Around that time, Haddish allegedly told Jane that she’d discovered “a perfect role” for the teen in her very own commercial. According to the suit, Jane nor her mother were aware of shoot details, while Haddish and Spears, 47, were said to know the plot. Haddish paid Jane $100, the lawsuit claims, before sending her home.

Jane told The Daily Beast she didn’t initially tell her mother about the alleged incident.

“I didn’t confide to nobody else about how weird I felt at that moment,” she said.

A year later, Haddish allegedly reached out to the siblings’ mother to let her know that she was interested in the younger brother, John, for a Nickelodeon sizzle reel.

The suit claims the 7-year-old was molested by Haddish and Spears while filming what became a disturbing video published via Funny Or Die and more online platforms, titled “Through a Pedophile’s Eyes.”

A representative for Funny or Die told The publication in a statement, “Funny Or Die found this video absolutely disgusting and would never produce such content. We were not involved with the conceptualization, development, funding, or production of this video. It was uploaded to the site as user-generated content and was removed in 2018 immediately after becoming aware of its existence.”

In a statement to Page Six, Spears’ attorney, Debra Opri, said, “He isn’t going to fall for any shakedown.”

“Plaintiff’s mother, Trizah Morris, has been trying to assert these bogus claims against Ms. Haddish for several years,” he told Page Six.

“Every attorney who has initially taken on her case and there were several ultimately dropped the matter once it became clear that the claims were meritless and Ms. Haddish would not be shaken down,” Brettler continued.

“Now, Ms. Morris has her adult daughter representing herself in this lawsuit. The two of them will together face the consequences of pursuing this frivolous action.”

Both siblings claim they have developed debilitating social disorders.The siblings also said their mother tried to reach a $15,000 settlement with Spears over the alleged molestation video.

The sister-brother pair are suing Haddish and Spears for general and special damages, as well as “any appropriate statutory damages.”