david pratt ukrainians prepare for what their independence day will bring

SOME weeks ago, when I first returned to Kyiv, I asked a Ukrainian colleague where the best place might be to mark Ukraine’s Independence Day, which falls today. It was meant as a professional question, one journalist’s enquiry to another as to an interesting location that might offer a colourful story.

My colleague’s response was a simple one-word reply, delivered almost instantaneously and with a mischievous grin. “Poland,”he replied.

It was typical Ukrainian black humour, something I’ve got used to in people’s responses here to the dangers and hardships the war with Russia has thrown at them.

Like many Ukrainians, my colleague was under no illusions that today and the days surrounding it could be especially testing ones and that perhaps the safest place would be in neighbouring Poland or another of the allied countries that borders Ukraine.

His reply, no doubt, was also shaped by the fact that this year’s Independence Day marker, which recognises 31 years of freedom from Soviet rule, also falls precisely six months on from Russia’s invasion of Ukraine on February 24.

Even Ukrainian president Volodymyr Zelenskyy has warned citizens that Russia might be planning a major attack to coincide with today’s celebrations. The Kremlin is fond of key anniversaries and dates, understanding their resonance and collective psychological impact when exploited for political or military ends.

Given this and the fact Russian forces have been on the receiving end of a bloody nose this past week in occupied Crimea, then doubtless Moscow would like nothing better than to stick one back at Ukraine and when better in the Kremlin’s view than to do it right now?

Dates aside, there is every reason to be cautious after reports from open source and independent intelligence groups suggested Russia might be massing missiles in the territory of its own neighbouring ally Belarus, from where Russia has previously launched attacks on Ukraine including its ground invasion back in February.

Writing on the online instant messaging platform Telegram the other day, activists from the Belarusian Hajun Project, which since the start of the war in Ukraine has monitored Russian activity and tried to identify possible missile strikes, says it has observed a build-up of weapons at the Zyabrovka air base in Belarus by monitoring satellite images.

Satellite imagery from the Colorado-based space technology company Maxar Technologies indicated there are 10-14 Russian S-400 Triumf missile air defence systems at the base. They can be used to hit ground targets as well as other missile systems. In addition, Russian forces have deployed five carriers of Kalibr sea-launched cruise missiles as well as ships in the Sea of Azov. In short, as of Sunday, there were five Russian cruise missile carriers in the Black Sea, the total capacity of which is 36 missiles with the capability to hit Ukrainian cities including Kyiv.

Faced with this heightened threat, Zelenskyy urged his fellow Ukrainians not to allow Russia to “spread despondency and fear” ahead of today’s holiday.

Understandable and wise as Zelenskyy’s warning and appeal is, from what I’ve witnessed here in Kyiv, its citizens are far from intimidated. More cautious perhaps but certainly undaunted. That much has been obvious these past few days down on Khreshchatyk boulevard, Kyiv’s main street where the Ukrainian authorities have laid out a “parade” of destroyed Russian armour. It’s now believed the Russians planned a military parade in the Ukrainian capital that they mistakenly believed would fall in three days. In fact, according to some reports, so convinced were certain senior Russian officers that such a parade would take place that they had even prepared formal uniforms for the event.

In what amounts to a trolling of the Russians, Ukrainian officials decided on an alternative parade. On Monday, I went to see for myself the result, as did countless citizens of Kyiv, who made their way along Khreshchatyk boulevard, weaving around and peering in at the dozens of burnt-out, captured Russian tanks, armoured personnel carriers, rocket launchers and artillery pieces that sit in two long lines not far from the famous Maidan or Independence Square “The aggressors dreamt of capturing Kyiv in three days.

The occupiers intended to hold a parade in our capital. They’re now in the city as scrap metal,” tweeted Ukrainian Minister of Defence Oleksii Reznikov. There’s no doubt this display, which suddenly appeared last weekend, is something of a morale booster for ordinary Ukrainians who are bearing the brunt of this war. But it’s also a way of sending a message to Moscow that Ukraine will not be cowed and that should Russia continue to try to take territory here, it will pay a heavy price indeed.

What struck me most though about the many ordinary Ukrainians young and old who I saw visiting this cross between a pop-up art installation and stark reminder of the war on Ukraine’s soil, was the complete absence of any triumphalism or gloating.

Mother and child on scooter on Khreshchatyk Boulevard

Yes, Ukrainians are angry about what has happened to their nation and the sacrifices they have had to make but they remain dignified in their defiance. If anything, those I saw wandering among the debris of war on Khreshchatyk boulevard, were solemn, reserved, if still undoubtedly curious about the charred and crushed weaponry on display.

Given the vast numbers of people present, there was barely a sound.

Perhaps this was because other reminders of the cost in Ukrainian lives were never far away, including the remembrance garden of yellow and blue Ukrainian flags, each with the name of a fallen soldier, that sit fluttering in their hundreds on a grassy verge on Independence Square. 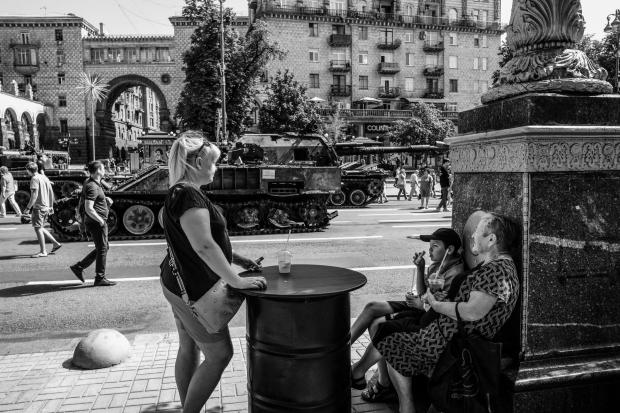 Family day out on Khreshchatyk Boulevard, to see display of destroyed Russian vehicles

As I write this just hours before the Independence Day anniversary, the air raid sirens have already rung out several times, as they do every day. Many here have become so used to the sound that they barely bat an eye. Today, though, the citizens of Kyiv and Ukrainians across the country will be cautious and vigilant. I’m conscious here of tempting fate, but here’s hoping it stays quiet in Kyiv over the coming days.

Here’s hoping, too, that I and the Ukrainians who have been kind enough to let me into their lives once again don’t have to take my colleague’s advice – albeit in wry jest – and see Poland as the best place to be.