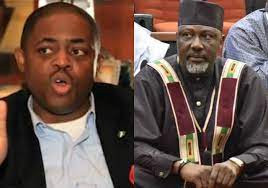 
Both men have been at each other’s throats in the last few days.


The fight between the former allies began a few days ago after Melaye allegedly stated that all governors under the Peoples Democratic Party, PDP, spent money on ensuring that Iyorchia Ayu emerged as the party’s National Chairman.

Reacting, Fani-Kayode knocked Melaye for making such a comment and then urged security operatives to ‘arrest and prosecute’ Ayu and the PDP presidential candidate, Atiku Abubakar.


Responding, Melaye said FFK’s comment lacked comprehension, stressing that it was “a voyage in meddlesomeness and idleness.” Read here.

Continuing their fight today, FFK started by posting the viral video of Dino ”collapsing” after he was arrested by police officers who surrounded his Abuja home in January 2019 and wrote;

He was so terrified of the police and of being detained that he fainted and started bleating like a gut*ted p*g.

A grown man, weeping and crying and crawling all over the floor simply because he was arrested.

Is this the man that wants to lead the charge for a serious presidential contender?

We will eat them for breakfast!

No wonder he got upset when I called for his arrest and that of their party Chairman.

The idea of the police bundling him again drove him ins*ne and he started to in*ult his elders, betters and those of us that fed him in the past.

P.S. Remember what Dan Jay did to you years ago?

Let us pray it does not happen to you again. 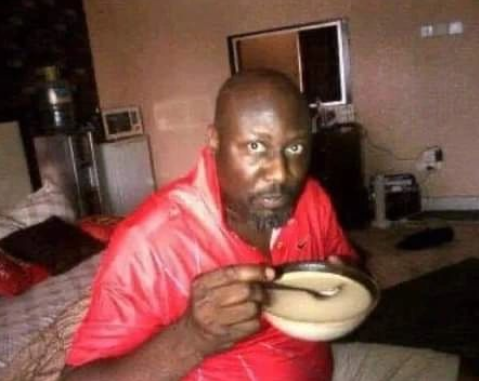 He went on to post this photo of Dino drinking Garri with the caption;

”This is Dino Melaye drinking gari when he was still struggling!

You can take a man out of the jungle but you can’t take the jungle out of a man!

This clown is real jungle! ”

Responding to FFK’s comment, Dino Melaye vowed to continue his attack on FFK if he is ‘sufficiently provoked”

”FFK l posted this picture myself in 2010 as a member of House of Reps showing how much l like garri Ijebu. I have never hidden the fact that am from a very poor background. I am proud of my past, my present and my future. Won 3 National elections and have a second address. My office in Abuja is 4 Owando close, zone 4 Wuse by Sheraton hotel. Mind you it is my property. Try get nominated as a counselor b4 you can face me. I can hire you and pay you upfront 10Years salary. Never been invited by Efcc or Icpc. Face your corruption charges as l repeat no food for lazy FFK in PDP. If am sufficiently provoked l will enter 2nd baze with you l promise.” 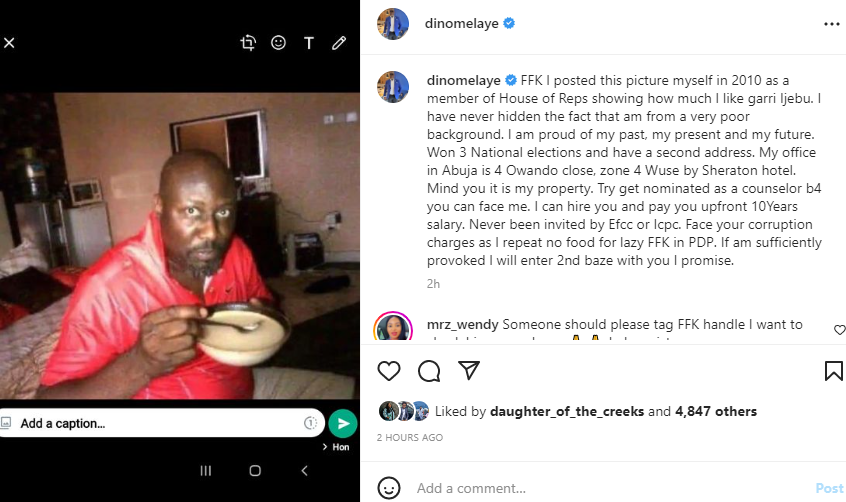