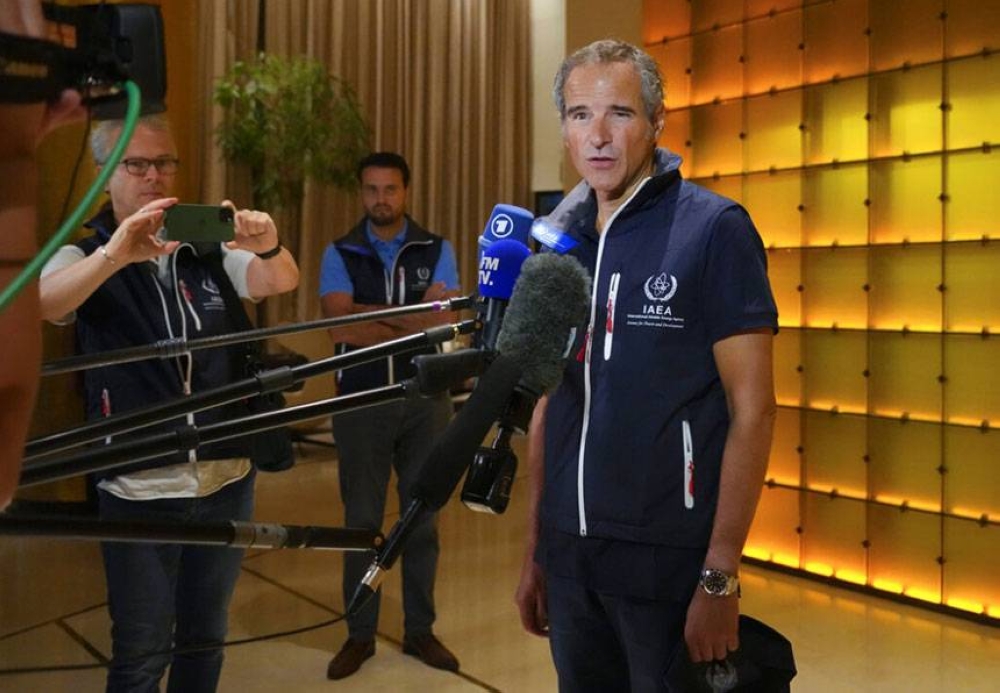 KYIV: A convoy of jeeps carrying United Nations atomic inspectors was crossing Ukraine early on Wednesday toward the Russian-held Zaporizhzhia Nuclear Power Plant, holding the world’s hope that it could help secure the safety of the facility in the middle of a war zone and avoid any nuclear catastrophe.

Yet ominously, the Moscow-backed local authorities in Zaporizhzhia claimed Ukrainian forces shelled the territory of the plant and the nearby town of Enerhodar overnight. Both sides have accused each other of bombing the wider area for weeks now, increasing fears of an accident or radiation leak.

“We are going to a war zone. We are going to occupied territory,” Rafael Grossi, director-general of the International Atomic Energy Agency (IAEA), said of the unprecedented mission for the UN’s nuclear watchdog.

“This is the first time. It’s the first time of anybody’s going to cross the front line,” he added, saying he had received “explicit guarantees” from Russia that the mission of 14 experts would be able to work there.

But in a war of claims and counterclaims that are extremely hard to verify, the Moscow-installed local administration in Enerhodar said on Wednesday that Ukrainian troops had shelled the territory of the plant with 60 hits over the past 24 hours. The strikes included a drone attack on the facility’s administrative building, which was damaged. Another drone hit its training center.

Although the administration said there was no casualty or release of radioactivity, it did little to assuage fears that the safety of the mission itself could be compromised. Ukraine on Tuesday already accused the Russians of bombing the planned access roads to the plant to try to encourage it to change route and move via the Russia-controlled areas instead.

The power plant has been occupied by Russian forces and operated by Ukrainian workers since the early days of the six-month-old war.

The world was watching the mission’s progress with anxiety. European Union foreign policy chief Josep Borrell renewed a call to Russia for the area around the power plant to be fully demilitarized.

“They are playing games. They are gambling with the nuclear security,” Borrell told reporters in the Czech Republic’s capital Prague. “We cannot play war games in the neighborhood of a site like this.”

Ukrainian Energy Minister German Galushchenko said on Wednesday that Moscow was continuing its obstructionist course. “We have information that they are now trying to hide their military presence, so they should check all of this,” he said of the UN mission.

Kyiv is seeking international assistance to try and demilitarize the area.

“We think that the mission should be a very important step to return (the plant) to Ukrainian government control by the end of the year,” Galushchenko told The Associated Press (AP).

If all goes well, the IAEA inspectors should reach the Zaporizhzhia region, 450 kilometers (280 miles) southeast of the Ukrainian capital later on Wednesday. The experts may have to pass through areas of active fighting, with no publicly announced ceasefire.

The plant was recently cut off temporarily from the electrical grid because of fire damage, causing a blackout in the region and heightening fears of a catastrophe in a country haunted by the 1986 Chernobyl disaster.

The Zaporizhzhia facility is a vital source of energy for Ukraine and remains connected to its power grid. Ukraine and Russia accuse each other of shelling the wider region around the plant and the risks are so severe that officials have begun distributing anti-radiation iodine tablets to nearby residents.