Comedian Ryan Davis has lashed out at Nigerian-born Celtics coach, Ime Udoka for cheating on his partner and actress, Nia Long, with a female member of the team staff; a violation of the franchise’s code of conduct.

Davis in a video he shared on Instagram, said he chose not to believe that Nigerians are scammers but has no more defence for Nigerians after Ime Udoka cheated on Nia Long.

The comedian who reeled out some of the sacrifices Nia Long made to be with Udoka who she has been in a relationship with since 2010, stated that the now suspended Celtics coach should know that Nia Long chose him and not him choosing her.

Also outlining how much Nia long is valued by male black Americans, Davis said the Coach should be kicked out of the country for not valuing the woman he goes back home to.

Celtics has already announced the suspension of head coach Ime Udoka for the entire 2022-23 season, without guaranteeing his return to the role for the following season.

In a statement, the team said the reason for the suspension was Udoka’s “violations”, in the plural, of team policies.

45-year-old Udoka has been in a relationship with actress Nia Long since 2010. The couple share a son together. 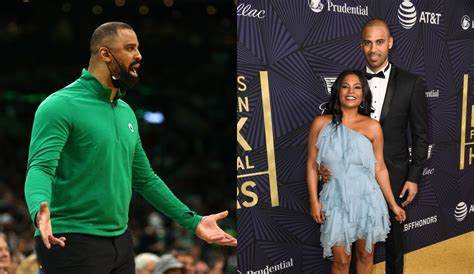 Udoka was hired by Boston after spending eight years as an assistant under Gregg Popovich with the Spurs before brief stints with the 76ers and Nets. He was considered one of the brightest coaching stars in the league.

If Udoka is suspended for a significant amount of time, it would be a blow to the Celtics, who thought they had their coach of the present — and future. Udoka led the Celtics to the Eastern Conference championship and a berth in the NBA Finals against the Golden State Warriors in his first season as head coach.

ESPN reported that Celtics assistant Joe Mazzulla would be in serious consideration to become the interim coach.