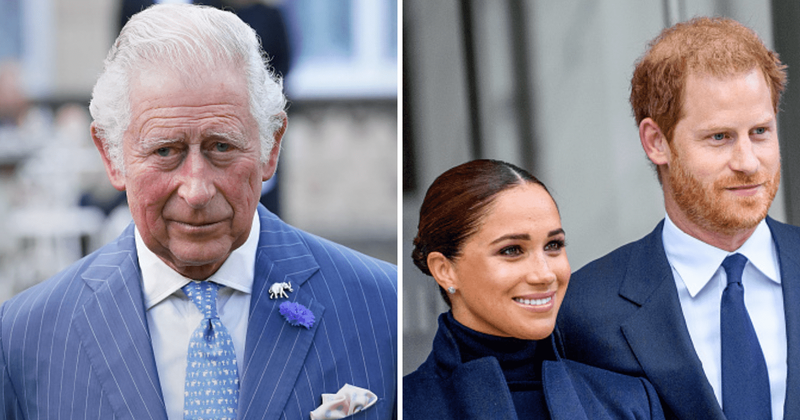 King Charles reportedly ‘told’ Prince Harry not to bring wife Meghan Markle to Balmoral Castle as he and other senior royals rushed to the bedside of the dying Queen.

It was gathered that a mild drama involving the Duke and Duchess of Sussex played out as the Queen died at the age of 96 on Thursday September 9.

According to The Sun, Prince Harry was at Frogmore Cottage when he received a call from his father asking him not to bring Meghan.

‘Charles told Harry that it wasn’t right or appropriate for Meghan to be in Balmoral at such a deeply sad time,’ a source told the newspaper.

‘It was pointed out to him that Kate was not going and that the numbers really should be limited to the very closest family.

‘Charles made it very, very clear Meghan would not be welcome.’

Meanwhile, The Telegraph reported that Harry was not initially summoned when senior royals made their way up to Balmoral, like his brother Prince William was, due to constitutional reasons.

A royal insider also said that ‘it’s quite hard to spend too much time with someone you know is about to publish a tell-all book about you.’

Another added: ‘I think the general reaction to Harry and Meghan’s behaviour has been one of incredulity to be honest.’

Putting aside the anguish of the past few years, the initial decision in itself, that both Sussexes would travel, was seen as wholly inappropriate, according to palace insiders, for one very simple reason: this was a private, family moment.

Only the two oldest children of the elderly monarch, Charles and Anne were present when the Queen passed away.

Her other children, Andrew and Edward, arrived as soon as they could afterwards on a plane with Prince William, who is now first in line to the throne.

Edward was accompanied by his wife, Sophie, but she was adored by the Queen, who views her as a second daughter and is likely to have been there at her request.

Prince Harry made his own way to Balmoral by private jet and faced a lonely drive to the castle, arriving at 7.52pm, an hour and a half after the palace’s historic statement informing the nation of the death of Her Majesty. He was later seen being driven out at 8.28am yesterday, 12 hours later.

The new Sovereign, who became King the moment that his mother Queen Elizabeth II passed away on Thursday afternoon at Balmoral Castle aged 96, said he wished to ‘express my love for Harry and Meghan as they continue to build their lives overseas.’

The Duke and Duchess of Sussex plunged the monarchy into crisis during the years of the Queen’s reign after quitting frontline royal duties and moving to California two years ago, a saga that brought between Harry and his brother William, allegations of racism against the royals and claims the Firm failed to help a suicidal Meghan.

After their bombshell interview with US talk show host Oprah Winfrey, Harry appeared to suggest, in a mental health podcast, that his father and the Queen and the Duke of Edinburgh had all failed as parents while the family was still mourning Prince Philip’s death last year.