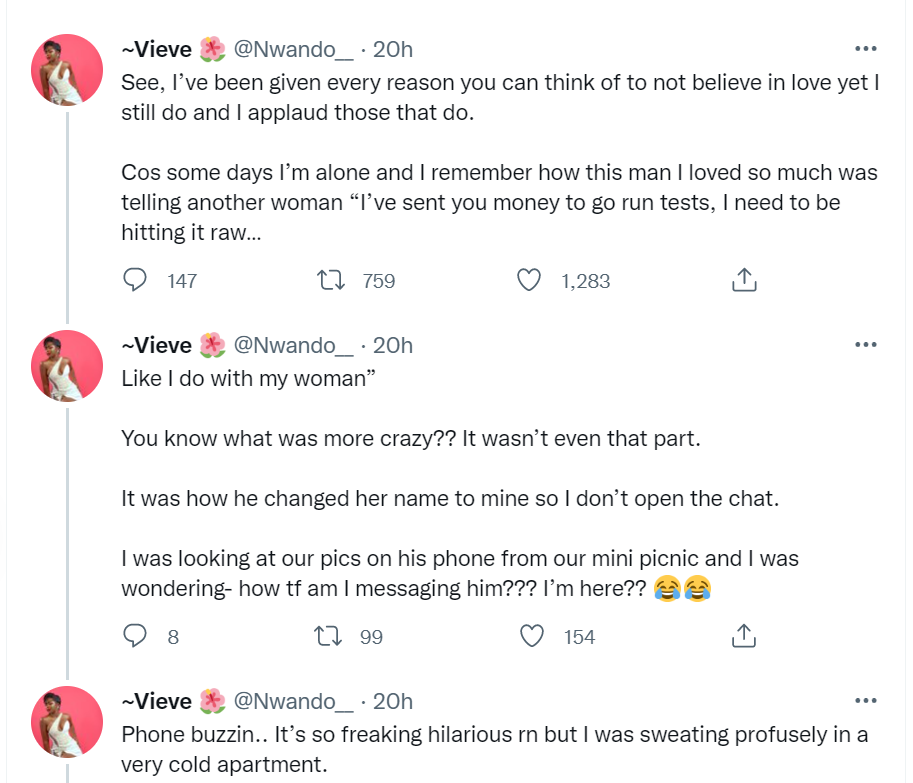 A lady has recounted how she began sweating in a cold apartment after discovering that her boyfriend was cheating.

Sharing her story on Twitter, @Nwando_ revealed that she’s been given every reason not to believe in love.

The lady who recalled how her ex-boyfriend sent money to another lady to conduct a medical test so they can have raw sex, further revealed that he saved his side chick’s name with the same name he used to save hers

The Twitter user revealed that she started ”sweating in a cold room” upon opening the chats and she also realized that the lady said who is a beauty queen, has been liking her photos on social media.

See, I’ve been given every reason you can think of to not believe in love yet I still do and I applaud those that do. Cos some days I’m alone and I remember how this man I loved so much was telling another woman “I’ve sent you money to go run tests, I need to be hitting it raw like I do with my woman”

You know what was more crazy?? It wasn’t even that part. It was how he changed her name to mine so I don’t open the chat. I was looking at our pics on his phone from our mini picnic and I was wondering- how tf am I messaging him??? I’m here??

Phone buzzin.. It’s so freaking hilarious rn but I was sweating profusely in a very cold apartment. The exact same way he saved my name. I opened the chats and the only thing was our dps were different

The girl say na “I know you still treat her differently, I’m jealous”

I say God I don see things for this small years I dey this earth. I just remembered cos same beauty queen won’t stop coming to like my pictures fgs!! Baby, there’s a reason you’re not blocked, I know you know me, I hope you know I know you?? I’m not your rival, I promise