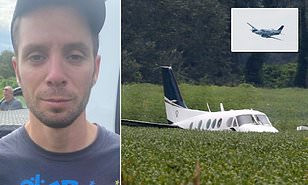 A Man who threatened to crash a stolen plane into Walmart shopping mall at Tupelo, Mississippi, US, reportedly didn’t have a pilot license or experience landing planes, according to police.

On Saturday, September 3, a Walmart shopping center was evacuated after police were made aware that a pilot flying above the store threatened to “intentionally crash” into it. After circling the Walmart for a while, the plane later made its way over the Holly Springs National Forest and crash landed safely.

Mississippi Governor Tate Reeves confirmed in a tweet that the plane had landed with no injuries recorded.

“Thankful the situation has been resolved and that no one was injured. Thank you most of all to local, state, and federal law enforcement who managed this situation with extreme professionalism,” he wrote

Tupelo Police chief John Quaka said during a press conference that Cory Wayne Patterson, 29, had been confirmed as the pilot of the plane that threatened to “intentionally crash” into the Walmart on West Main.

Cory Patterson, 29, had received some flight instruction, but did not have landing experience or a pilot’s license. He had access to the twin-engine Beechcraft King Air C90A because he was an employee at the airport who was involved in refueling planes.

The stolen plane took off around 5 a.m. and led to the evacuation of a local Walmart after Patterson allegedly threatened to crash it into the store

The student pilot then posted a chilling message on social media, saying that he ‘never intended’ to hurt anyone.

Quaka said Mr Patterson was now in custody and charged with both grand larceny and making terroristic threats before noting that the arrested man was an employee at the airport in Tupelo.

The police chief added that the man’s job involved refueling planes and that he does not have a pilot’s license or experience in landing planes. Though, he said, Mr Patterson has had some flight instruction.

The tower at the airport was not manned at the time of the theft, with police describing it as a ‘crime of opportunity’ because Patterson had easy access to the airport.

Patterson contacted police regarding his intentions at 5:08am, and remained in contact with them for some time before ending communication.

In addition to the aforementioned charges, Mr Patterson is expected to face federal charges, Quaka added.