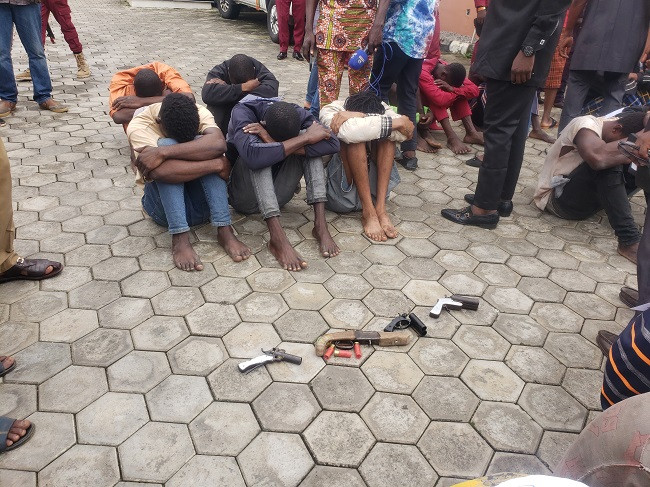 The Ondo State Security Agency codenamed Amotekun has arrested three members of a notorious kidnap gang responsible for the abduction of some burial guests along Benin-Ifon road.

It will be recalled that the burial guests were kidnapped around Benin-Ifon road last Saturday September 3, while returning to Akure from Ewatto in Edo State, with their abductors demanding N90m as ransom  to secure the release of the victims.

Speaking during the parade of the three suspects on Wednesday, September 7, the Commander of the Amotekun in the state, Chief Adetunji Adeleye, said the corps has entered into synergy with other security agencies in neighbouring states, particularly Edo and Kogi states to jointly combat criminals, particularly kidnappers, who operate on the bother lines.

Adeleye disclosed that the trio identified as Shaibu Dolo, Saidu Yinusa and Haruna Musa were arrested in their camp located between Edo and Ondo State.

Adeleye explained that the three suspects had confessed to the crime but denied their involvement in the abduction of the burial guest, saying they are only in charge of food and charging phones in the camp

“We arrested some members of the kidnapping gang that were arrested along the Ose/ Owo axis where we had a recent kidnap. We tracked the phones that were being used by the kidnappers and we met them around the tracking area but they told us that their leader had run away,” he said.

“They explained that their own job is to buy food and charge the phones in the camp but we are still working towards the arrest of others and I can assure you that the criminals will be arrested in no distance period,”

On the collaboration with Edo and Kogi states, Adeleye said the synergy became necessary to jointly combat criminals, particularly kidnappers, who operate on the border lines.

He said that the synergy became necessary when it was discovered that most of the kidnappers usually sneak into the state from the neighbouring states and after operations at the border lines, they take their victims to their resident states and begin to negotiate with the families of the abductees for ransom.

“We are working towards sealing the boundaries generally because the kidnapping cases along the Edo and Kogi states boundaries is becoming a worrisome situation,” he said.

“A full complement of men of the 32 Artillery, with the Police, DSS and Amotekun have been working on series of operations and lately we had a collaboration with the Edo State team and waiting for the Kogi to join us

“What happens most of the time is that when we drive them off from Ondo State, they move to Edo and once we move they return to Ondo boundaries because they know they cannot successfully operate inside the main town, so they stay around the boundary such that they could return to Ondo State within minutes

“Some of those arrested at the scene of the last kidnap were as a result of our commitment and tracking that took us to those locations where the three suspects were apprehended. So we are working on it to bring their leader and other members of the gang to book.”

Adeleye also disclosed that his men arrested members of a syndicate who specialised in robbing the people of their expensive phones, saying the syndicate had operated in seven different states before they were arrested in Akure, Ondo State capital.

Adeleye who estimated the value of the phones stolen by the syndicate in the seven states to N84m said they were arrested in an hotel where they lodged in Akure.

“We have arrested a total of 22 criminals that have been disturbing the peace of the state in the last few days. They include an interstate syndicate robbing people of expensive phones and other valuable.

“They confessed to have successfully operated in seven states until they got to Ondo state and we are able to track them to the hotel where they lodged.

“The way they operate is that they came into the state with a car and two motorcycles and contacted two or three locals who understand the terrain to take them round the town for survey.

“They visit big supermarkets, busy commercial markets, but they don’t steal money, only expensive phones and we have over 20 phones which they stole around Akure metropolis within two days of their operation before they were arrested

“The syndicate also deal in some criminal things that we are able to unravel but the good thing is that they confessed but they have successfully operated in seven states and they have not been apprehended until they got to Ondo state when we tracked them down.”