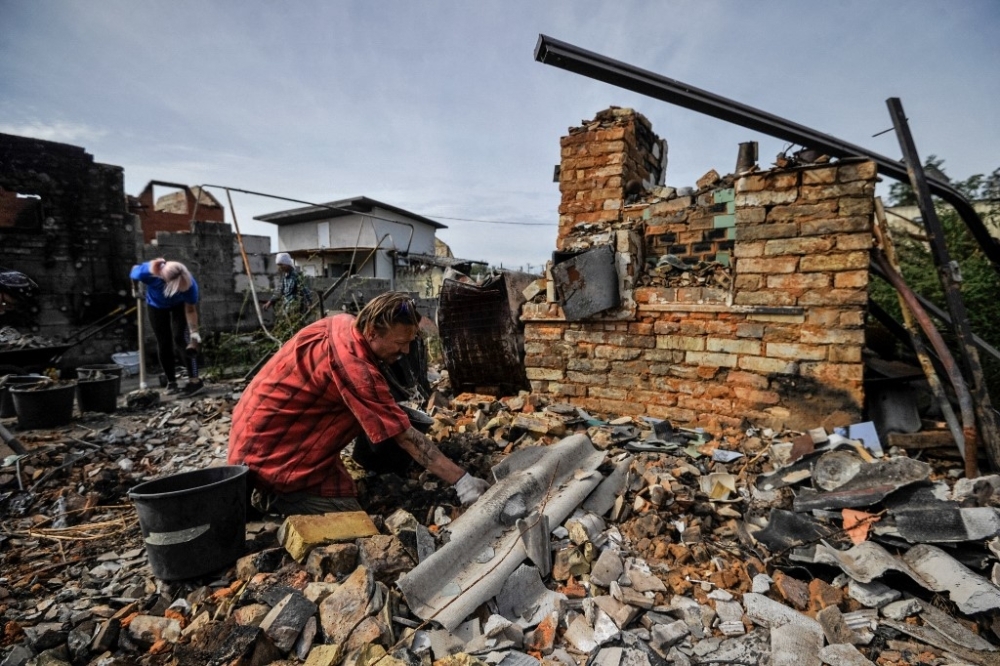 GRAKOVE, Ukraine: Russia said on Friday it was sending reinforcements to the Kharkiv region in eastern Ukraine, where Kyiv claimed it had retaken dozens of settlements as part of a broader counteroffensive.

“We are gradually taking control over new settlements. We are returning the Ukrainian flag and protection for our citizens everywhere,” he said, calling on Ukrainians to report any crime committed by the occupying forces.

In Kharkiv, Ukrainian officials have exhumed two bodies in Grakove village, which was recently recaptured from Moscow’s troops, as part of an investigation into a possible war crime.

Grakove was the scene of fierce fighting in the early weeks of Russia’s invasion.

A Russian-installed official, Vitaliy Ganchev, said in televised remarks that “fierce battles” were underway near the town of Balakliya, which Ukraine said it had recaptured on Thursday.

“We do not control Balakliya. Attempts are being made to dislodge the Ukrainian forces, but there are fierce battles, and our troops are being held back on the approaches,” Ganchev said.

“Now Russian reserves have been brought there, our troops are fighting back,” he added.

According to him, fresh shelling near the plant had caused a blackout in the nearby town of Energodar. That jeopardized the safe running of the plant.

“This is completely unacceptable. It cannot stand,” Grossi said, insisting on “the immediate cessation of all shelling in the entire area.”

Petro Kotin, head of Ukraine’s nuclear energy agency Energoatom, told Agence France-Presse (AFP) that Russian forces had tortured staff at the atomic facility, and that at least two people had been killed.

“Two people were beaten to death. We do not know where about 10 people are now. They were taken [by the Russians] and after that, we have no information about their whereabouts,” he said.

In Grakove, resident Sergiy Lutsay spoke to journalists about what he had seen. According to him, Russian soldiers had forced him to bury the bodies at gunpoint soon after the war began.

“They came to my house. I was with my father, [who is] 70,” Lutsay told journalists. “I was scared that they would threaten him.”

He would not confirm a police statement that said at least one of the two men killed had had his ears cut off.

‘Huge costs’ for RussiaUnited States Secretary of State Antony Blinken said Russia’s push to reinforce Kharkiv showed that Moscow was paying “huge costs” in its bid to capture and then hold Ukrainian territory.

“There are a huge number of Russian forces that are in Ukraine, and unfortunately, tragically, horrifically, President (Vladimir) Putin has demonstrated that he will throw a lot of people into this at huge cost to Russia,” he said.

He was speaking during a visit to Belgium’s Brussels on Friday for talks with North Atlantic Treaty Organization Secretary-General Jens Stoltenberg.

A day earlier, he paid a surprise visit to Kyiv during which he unveiled another $2.8 billion in military aid and hailed Ukraine’s “clear and real” frontline gains.

The town, which had been under Russian control for about six months and had a prewar population of about 30,000 people, fell early on to Russian forces after the invasion began on February 24.

Now, Russian officials in Kharkiv say they are evacuating civilians toward Russia “until the situation stabilizes.”

On the Ukrainian side, however, Kharkiv Gov. Oleg Synegubov warned people not to return to newly recaptured areas while “cleaning and de-mining” took place.