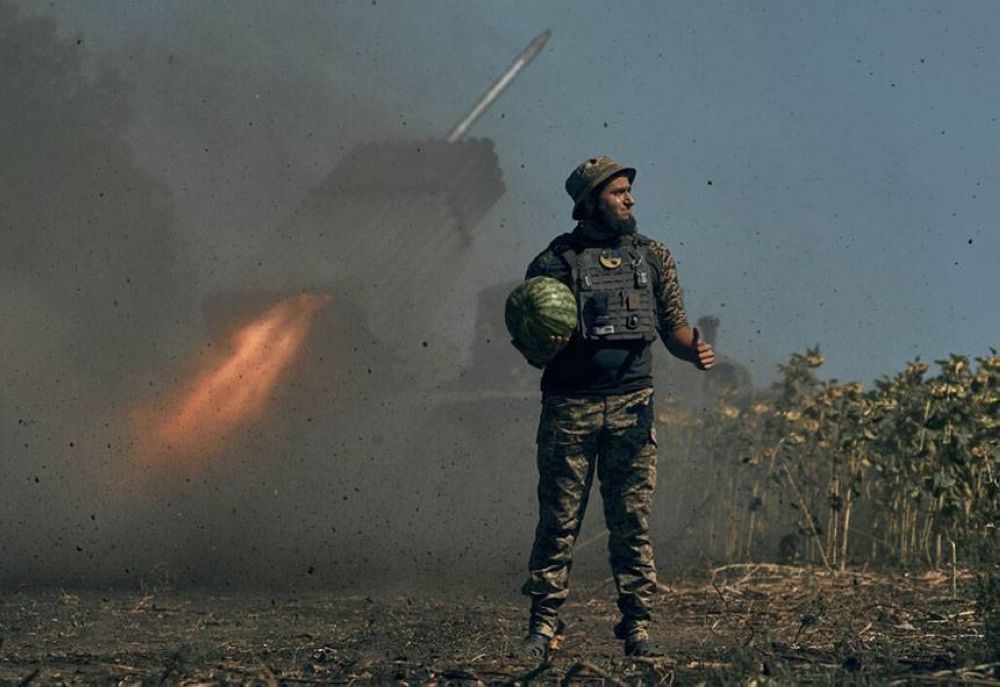 KYIV: Energy problems plagued Ukraine and Europe as parts of the Russian-occupied region that is home to a largely crippled atomic facility were reported to have experienced a blackout on Sunday.

Only one of six reactors at the Zaporizhzhia Nuclear Power Plant was connected to the electricity grid, and Russia’s main pipeline carrying natural gas to Germany remained shut down.

The fighting in Ukraine and related disputes over pipelines lie behind the electricity and natural gas shortfalls that have worsened as Russia’s war in Ukraine, which began on February 24, grinds on for a seventh month.

Both issues will take center stage this week. International Atomic Energy Agency (IAEA) inspectors are scheduled to brief the UN Security Council on Tuesday about their inspection and safeguard visit to the plant.

Much of the Zaporizhzhia region, including the key city of Melitopol, lost power on Sunday.

But electricity was gradually being restored, said Vladimir Rogov, head of the Russia-installed local administration in Enerhodar, the city where the nuclear power plant is located. To the southwest, power was also out in several parts of the port city of Kherson, according to Russia’s Tass news agency. Rogov blamed the outages in both locations on damage to high-voltage power lines.

While Rogov said no new shelling of the area around the six-reactor atomic facility was reported on Sunday, the effects of earlier strikes lingered.

The IAEA said on Saturday the plant was disconnected from its last main external power line and one reactor was disconnected because of grid restrictions. Another reactor was still operating and producing electricity for cooling and other essential safety functions at the site, as well as externally for households, factories and others through a reserve power line, it added.

Russian forces have held the facility — the largest of its kind in Europe — since early March, with its Ukrainian staff continuing to operate it.

IAEA Director-General Rafael Grossi said he would brief the Security Council on a mission he led to the plant last week. The 14-member delegation braved gunfire and artillery blasts to reach the facility last Thursday after months of negotiations to enable passage through the fighting’s front lines.

Without blaming either warring side, Grossi said his big concerns were the plant’s physical integrity, its power supply, and the staff’s condition.

Hours before Russian energy company Gazprom was due to resume natural gas deliveries to Germany through a major pipeline after a three-day stoppage, it announced last Friday it couldn’t do so until oil leaks in turbines were fixed.

That is the latest development in a saga in which Gazprom has advanced technical problems as the reason for reducing gas flows through Nord Stream 1 — explanations that German officials have rejected as a cover for a political power play. Dismissing Gazprom’s latest rationale for the shutdown, Germany’s Siemens Energy — which manufactured turbines the pipeline uses — said turbine leaks could be fixed while gas continues to flow through the pipeline.

Von der Leyen blamed the invasion for Europe’s energy crisis. Before EU energy ministers meet this Friday, she said electricity and natural gas prices should be decoupled, adding that she supported a price cap on Russian pipeline gas exported to Europe.

Natural gas is one of the main fuels used in electricity generation, and is a major source of Russia’s income, along with oil exports.

On Ukraine’s battlefield, Ukrainian President Volodymyr Zelenskyy said in his nightly video address on Sunday, without providing specifics, that Kyiv’s forces had regained control of two settlements in Ukraine’s south and one in the separatist eastern Donetsk region.

Mykolaiv and its surrounding region with the same name have been hit daily for weeks. Last Saturday, a child was killed and five people were wounded in rocket attacks in the region, said Vitaliy Kim, its governor.