EXCLUSIVE – ‘I’m a different kind of a guy, ya know?’: Trump vetoed White House plan to get COVID vaccine at public event with ex-presidents and would show off the ‘Lewinsky room,’ according to new book by aides

Donald Trump vetoed a plan to get vaccinated against COVID-19 alongside former presidents during the final weeks of his time in office, according to a new book by a husband and wife who worked at the heart of the White House pandemic response.

At the time, late 2020, the president had recently recovered from the virus.

But journalists were bombarding officials with questions about when he would be given the new vaccine.

‘So we started brainstorming potential scenarios in which the president could receive the vaccine in a public way,’ writes Brian Morgenstern, White House deputy press secretary and deputy communications director at the time.

‘One of the ideas was to have the president invite the former presidents to the White House—or to some other site—to have all of them receive the vaccine together in a show of unity.’

Aides figured that although the president might still have antibodies from his tussle with the virus, the event demonstrate his confidence in the safety of vaccine.

Morgenstern and another aide were tasked with taking the idea of appearing alongside Bill Clinton, George W. Bush and Barack Obama to the president in his private study.

‘He made a face that conveyed, shall we say, a healthy skepticism,’ writes Morgenstern.

‘But regarding an event with the former presidents, he said: “Nah, I’m a different kind of a guy, ya know?” 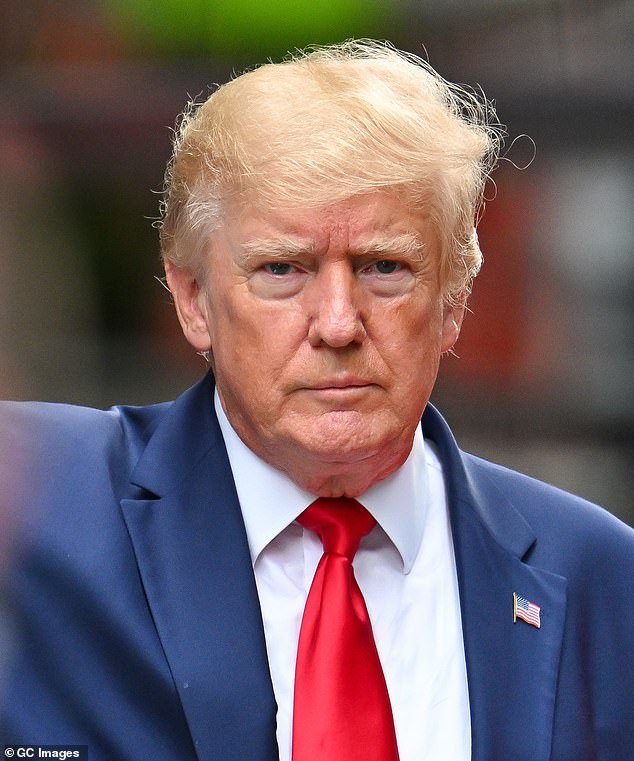 President Donald Trump rejected a plan to get publicly vaccinated for COVID-19 alongside former presidents, according to a new book by two former White House aides 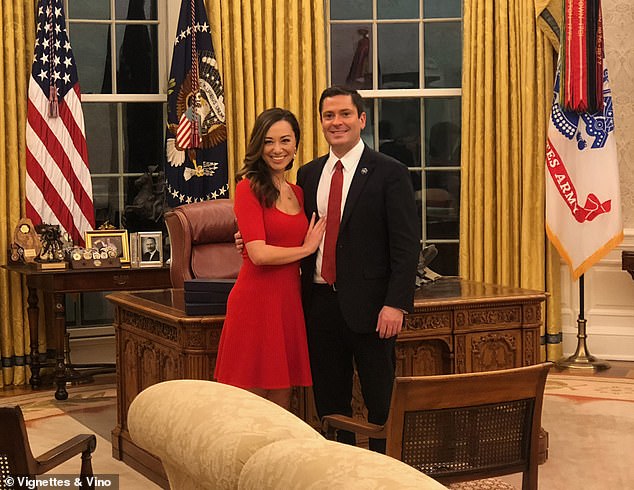 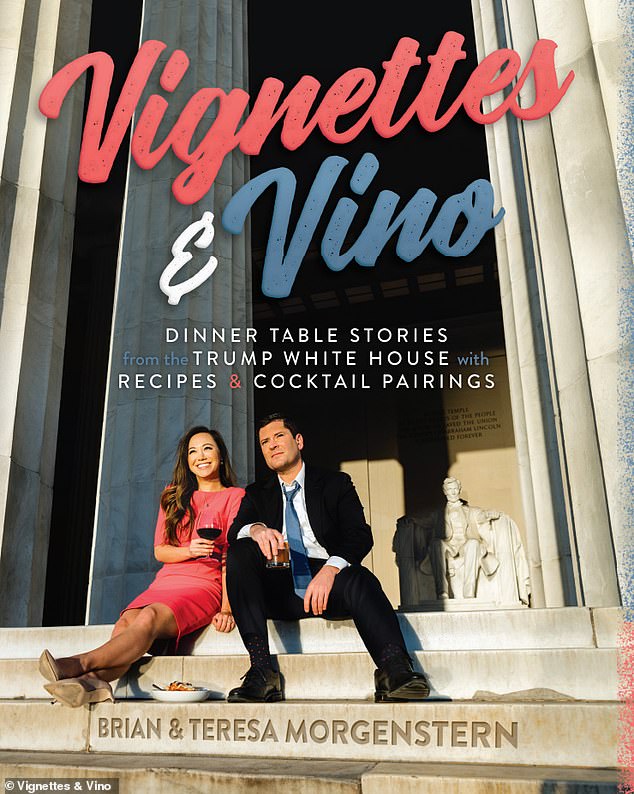 They married in June, and their book ‘Vignettes and Vino’ is published in October

In the event, he received his first shot in private before leaving the White House in January 2021, but only revealed the news months later.

The story is one of dozens of behind-the-scenes tales revealed in ‘Vignettes and Vino,’ written by Brian and Teresa Morgenstern.

Teresa was senior communications adviser at the White House for Operation Warp Speed, the federal program to develop a vaccine in record time.

It puts them at the heart of the administration during some of its most testing times.

But instead of the usual political tell-all, they have written a book that mixes recipes with light-hearted anecdotes.

‘Most books that come out of the Trump White House are pretty negative and nasty and controversial. And this is meant to be kind of the light-hearted side,’ said Teresa.

‘You know, we’re one of several couples that worked at the White House and in the administration. But I think, you know, we had such a special and unique experience, working on Operation Warp Speed and the COVID-19 task force and all those good things together.’ 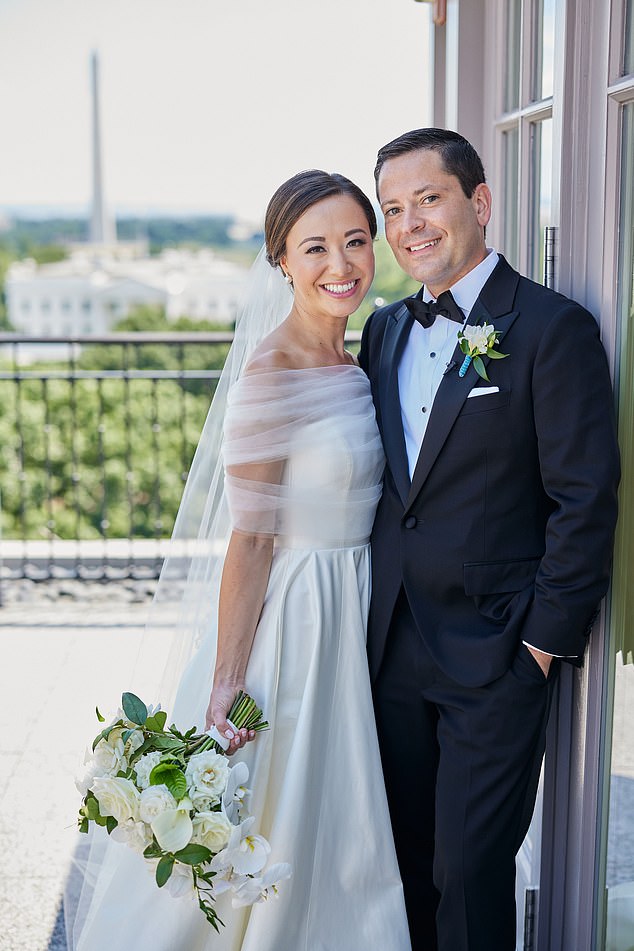 The Morgensterns developed recipe and drink conversations during COVID lockdown 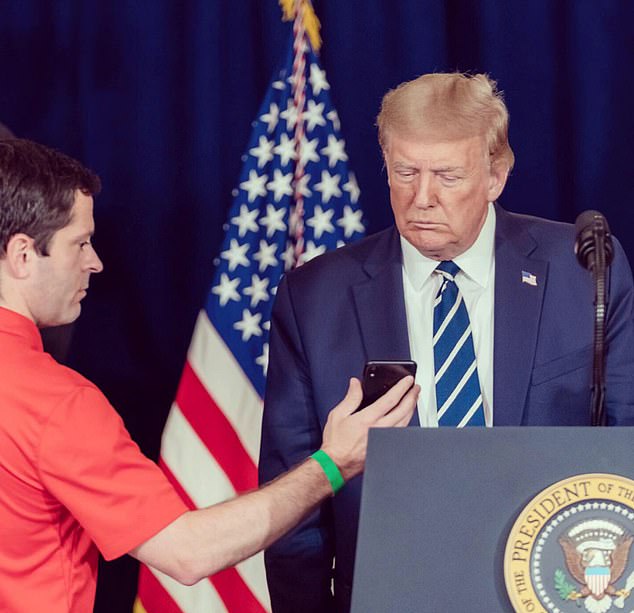 Morgenstern with Trump ahead of a hastily-convened press conference at Bedminster Golf Club, New Jersey, in August of 2020. Trump ribbed his aide for turning up in a polo shirt

The book takes readers on Air Force One and into meetings where Vice President Mike Pence clashed with COVID adviser Debra Birx.

And it offers a tour of the West Wing, through the Oval Office and the dining room that Trump used as his study.

‘Across from the restroom is what some of us referred to as “the store” and the president referred to as the Lewinsky Room, for reasons we don’t need to discuss in this book,’ write the authors.

They take a more tactful view than former aide Cliff Sims whose 2019 book ‘Team of Vipers’ described how Trump would delight in regaling visitors with crass conversations about Bill Clinton and Monica Lewinsky’s affair.

‘Vignettes and Vino’ will be published in October by Post Hill Press.

Some of the recipes are based on meals the couple developed during lockdown, when Brian was working long days at the White House and Teresa was stuck at home.

And they pair thematically with issues raised in each chapter. So there’s a ‘No-Collusion Mule’ and a salad with a ‘Turf War Dressing.’

‘There’s a chapter about discussing the Tiger King and whether or not we were going to pardon,’ said Brian. ‘So, you know, Joe Exotic we paired with an exotic recipe.’ 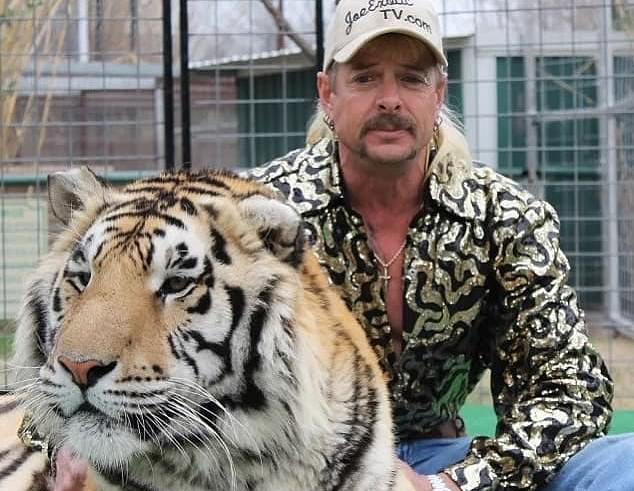 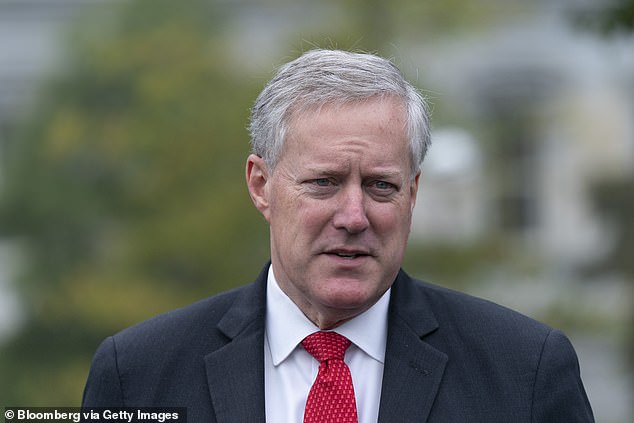 However, a new book reveals how White House Chief of Staff Mark Meadows shut down discussion of a pardon for Joe Exotic after he learned of the ‘murder-for-hire’ scheme

They reveal that the White House briefly – very briefly – discussed a possible pardon for Exotic, who had been sentenced to 22 years in prison for an attempted murder-for-hire scheme.

Trump had been asked about the issue during a White House press conference as public pressure mounted for a pardon, but said he did not know the show or its cast.

Then one day Brian was on Air Force One in the president’s cabin chatting with Press Secretary Kayleigh McEnany about trying to trigger an internet meltdown by tweeting a tiger emoji with no other commentary.

Chief of Staff Mark Meadows, who was discussing something else with the president, pricked up his ears and asked for more information.

He cut off McEnany as she tried to explain.

‘Meadows had heard enough with “murder-for-hire” and said abruptly, “Yeah, that doesn’t sound like something we ought to be involved with.”‘

The result is meant to be a book that provides everything for a dinner party – food, drinks and topics of conversation.

‘We lived through unimaginable circumstances in the White House during a pandemic Supreme Court confirmation, race riots across the country, very contentious elections, all at the same time,’ said Brian.

‘We had like the greatest crash course and crisis communications anyone could ever have.

‘But at the end of the day, the way we got through it with level heads, and didn’t completely go crazy, was because of our families and our friends and remaining grounded and having faith and knowing that what really matters is family, friends, good food, good drinks and togetherness.’