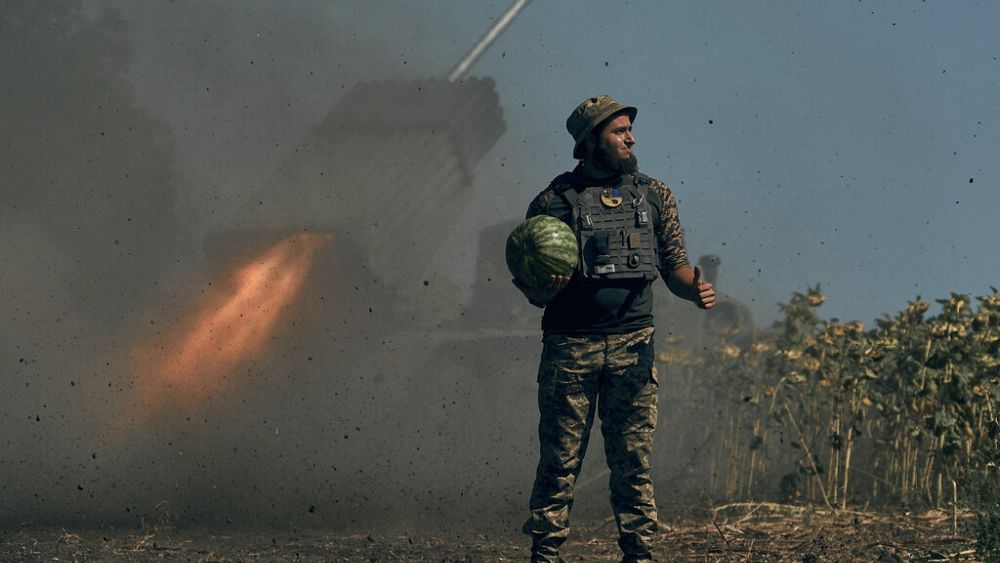 1. Ukrainian PM calls for even more military support from Germany

Ukrainian Prime Minister Denys Chmygal urged Germany to strengthen its military support for Ukraine, during a trip to Berlin on Sunday.

Chmygal acknowledged the efforts Germany had already made in support of his country in a visit that seeks to turn the page on recent tensions between the two countries.

Germany’s wavering attitude towards Moscow following the outbreak of war and its initial lack of military support for Kyiv deeply irritated the Ukrainian government.

But things have since improved. Chmygal’s visit to Berlin on Sunday, a first for a Ukrainian official of this level since the beginning of the Russian invasion, symbolises this relaxation.

The Ukrainian PM “thanked Germany for its military, financial, humanitarian and political support”, while stressing the need to provide Kyiv with more heavy military equipment, according to a statement from his office.

“The MARS II rocket launchers and the Panzerhaubitze 2000 [howitzers], supplied by Germany, performed well on the battlefield, and we hope to increase the supply of heavy weapons,” Chmygal was quoted as saying.

Less than a week ago, Chancellor Olaf Scholz called on Germany to take “special responsibility” to help Ukraine strengthen its artillery and air defence systems.

“We hope that Germany will become one of the leaders in the process of developing [Ukrainian] air defence,” echoed his Ukrainian counterpart on Sunday.

A US Navy amphibious assault ship, USS Kearsarge, took part in international training in the Baltic Sea on Sunday, amid soaring tensions in the region.

The Kearsarge is the first Wasp class ship to take part in a global exercise in the Baltics in at least two decades.

“It’s a first off for us in recent memory and it’s been very exciting,” said Captain Tom Foster, Commanding Officer of the Kearsarge.

With some other US Navy ships, the Kearsarge has been training for several months with the militaries of Sweden and Finland, which formally applied to join NATO after Russia invaded Ukraine in February.

The training mission is to promote safety and security in the region.

“In the past several months, we have been operating in the Baltics and in the Mediterranean,” said Captain Aaron Kelley, Commander of the Kearsarge Amphibious Group.

“We’ll continue to operate in those areas,” said Kelley. “Always the goal there is promoting safety and security in those regions and in international waters.”

The USS Kearsarge allows for training by such aircraft as AV-8B Harriers, UH-1 Y Venom and AH-1Z Viper helicopters as well as MV-22 Osprey planes.

US Ambassador to Russia John Sullivan left Moscow on Sunday after completing his term, the diplomatic mission said in a statement.

“Ambassador to the Russian Federation John J. Sullivan completed his term as United States Representative and left Moscow today,” the embassy said. Sullivan had been appointed ambassador to Moscow in December 2019.

“After his departure, he will end his career in public service which will have spanned four decades and under five [US] presidents,” it added.

The 62-year-old from Boston was notably Assistant Secretary of State under Donald Trump. He held several positions in the ministries of Justice, Defense and Commerce in the US.

Another member of the embassy, ​​Elizabeth Rood, will assume the role of charge d’affaires until the arrival of Sullivan’s successor, the embassy said. They did not provide any further details.

The departure of Sullivan comes at a time when relations between the United States and Russia are hitting the worst turbulence since the Cold War.

The US Embassy in Moscow has been at the forefront of diplomatic efforts to secure the release of US citizens detained in Russia, such as basketball player Brittney Griner, who was sentenced last month to nine years in prison for “drug trafficking.”

Ex-Russian President Dmitry Medvedev accused Germany of waging a “hybrid war” against Russia on Sunday, which he said justified turning off Russian gas supplies to the country.

These statements come as relations between Germany and Russia, already fractured by the Ukraine war, are buckling under even more strain, with Moscow suspending gas deliveries via the Nord Stream gas pipeline.

“German Chancellor Olaf Scholz says that Russia is no longer a reliable energy supplier,” said Medvedev. “Firstly, Germany is an unfriendly country, secondly it has imposed sanctions against the entire Russian economy … and it delivers lethal weapons to Ukraine.”

“In other words, she [Germany] has declared hybrid war against Russia,” he continued. “Germany is behaving like an enemy of Russia … and this uncle [Scholz] is surprised that the Germans are having small problems with the gas.”

Russian energy giant Gazprom has indefinitely suspended gas deliveries via the Nord Stream pipeline, officially due to an oil leak on a turbine.

Many European officials believe Moscow is weaponising energy to blackmail countries over their support of Ukraine ahead of what is set to be a difficult winter.

Though it is heavily dependent on Russian energy, Germany “will be able to cope this winter”, said Scholz on Sunday.

Russian authorities accuse European leaders of being responsible for the gas supply problems, claiming that sanctions imposed on Moscow have prevented it from maintaining the Nord Stream gas pipeline.

5. Russian shells rain down on Ukrainian port city and Kharkiv

Mykolaiv and its surrounding area have been hit daily for weeks during the six-month war.

On Saturday, a child was killed and five people were injured in rocket attacks in the region, governor Vitaliy Kim said.

Mykolaiv city mayor Oleksandr Senkevych did not specify whether there were any injuries in the overnight attack, which he said also damaged some homes.

Mykolaiv, on the Southern Bug River about 30 kilometres (20 miles) upstream from the Black Sea, is a significant port and shipbuilding centre.

One person was killed and two injured in shelling in the region, governor Oleh Syniehubov said.

Pavlo Kyrylenko, governor of the eastern Donetsk region where Russian forces have been trying to take full control, said four people were killed in shelling on Saturday.