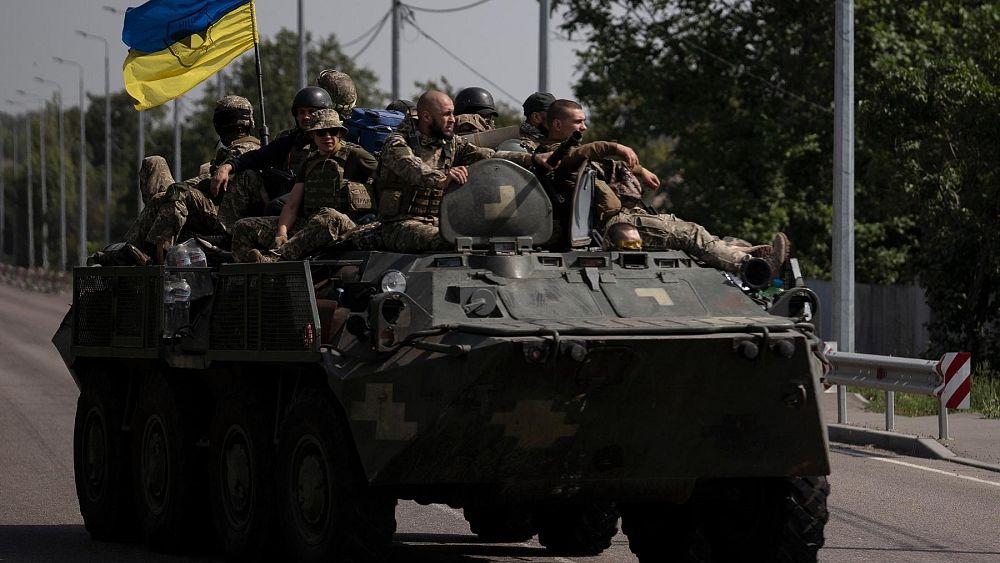 Russian rocket and artillery strikes hit areas across the Dnieper River from Europe’s largest nuclear power plant, Ukrainian officials said Sunday, as fears persisted that fighting in the vicinity could damage the plant and cause a radiation leak.

Russian forces took control of the Zaporizhzhia Nuclear Power Plant soon after the war began and hold adjacent territory along the left bank of the wide river. Ukraine controls the right bank, including the cities of Nikopol and Marhanets, each of them about 10 kilometers from the plant.

Russian Defense Ministry spokesman Igor Konashenkov said Sunday that Ukrainian forces had shelled the plant twice over the past day and that some shells fell near buildings storing reactor fuel and radioactive waste.

Heavy firing during the night left parts of Nikopol without electricity, said Valentyn Reznichenko, governor of the Dnipropetrovsk region. Rocket strikes damaged about a dozen residences in Marhanets, according to Yevhen Yevtushenko, the administration head for the district that includes the city of about 45,000.

The city of Zaporizhzhia, about 40 kilometers upriver from the nuclear plant, also came under fire during the night, wounding two people, according to a local council member.

Downriver from the nuclear plant, the Kakhovka hydroelectric plant and the city adjacent to it were hit by Ukrainian rockets three times on Sunday, said Vladimir Leontyev, the head of the Russia-installed local administration.

The plant’s dam is a major roadway across the river and a potentially key supply route for Russian forces. The dam also forms a reservoir that provides water for the Zaporizhzhia nuclear plant.

The British Ministry of Defence says that a new Kremlin-ordered drive to recruit more personnel to the Russian military “is unlikely to make substantive progress towards increasing Russia’s combat power in Ukraine.”

On 25 August Vladimir Putin issued a new decree increasing the overall number of personnel in the Russian armed forces: raising it by nearly 140,000.

The decree also instructed the Russian government to provide the funding to make this increase happen.

It’s unclear whether recruiters would try to make their quotas by signing up new volunteers – called ‘contract’ soldiers – or if they would simply increase their annual targets for the conscription draft.

There have been numerous reports that Russian military officials have been offering contracts to prisoners, with a promise that they’ll get out of jail if they join the army.

“In any case, under the legislation currently in place, the decree is unlikely to make substantive progress towards increasing Russia’s combat power in Ukraine,” the latest British military intelligence assessment concludes.

“This is because Russia has lost tens of thousands of troops; very few new contract servicemen are being recruited; and conscripts are technically not obliged to serve outside of Russian territory.”

Gas reserves are filling up “faster than expected” in Germany, despite drastic drops in Russian deliveries, the government announced on Sunday. The country now expects to meet its October gas reserves target during September.

“Despite the difficult circumstances (…) the reservoirs are filling up faster than expected,” Economy and Climate Minister Robert Habeck said in a statement.

The storage target set by the government for October, at 85%, “should be reached from the beginning of September”, the ministry noted.

Gas reserves currently stand at 82% of their capacity.

As recently as mid-August, Germany’s energy regulator was unsure about whether the country would be able to meet its objectives. But measures taken by Berlin in recent weeks, including energy savings and the massive purchase of gas from other suppliers have allowed “significant progress”, according to the government.

Germany is heavily dependent on Russian gas and has seen its deliveries drop sharply since the start of the war in Ukraine .

Gas flows have fallen to 20% of the main Nord Stream pipeline’s capacity, with the European Union accusing Moscow of using the energy as a “weapon” in the dispute.

Faced with the risk of shortages, Berlin set a series of targets in July for gas stocks to reach 95% by 1 November 1, before the onset of winter.

Poland and the Czech Republic have agreed to protect Slovakia’s airspace as the country seeks to retire its 11 Soviet-era fighter planes.

At an air show this weekend, the defence ministers from the three countries signed the agreement which will allow the Polish and Czech air forces to patrol Slovak skies until the arrival of newer, more modern planes.

The promise of protection comes as Russia’s war in Ukraine enters its seventh month. The deal also aims to ensure a quick response in case of air border violations on Slovak territory.

The Russian MiG-29s will be replaced by American F-16s and are set to be delivered in 2024.

The Slovak defence minister, Jaroslav Nad said that the decommissioned fleet may be donated to its neighbour Ukraine, under certain conditions. Since February 2022, the country has been at war with Russia and the eastern European nations fear potential spill overs onto their respective territories.

Read more, and watch video, at our story here.

Putin makes it easier for Ukrainians to stay in Russia

Russian President Vladimir Putin has signed a decree that simplifies the stay and work of hundreds of thousands of people who have left Ukraine for Russia since the Kremlin’s military intervention.

According to these new “temporary measures”, published over the weekend Saturday, Ukrainian passport holders, as well as residents of the occupied pro-Russian separatist territories of Donetsk and Lugansk in southeastern Ukraine, will be able to stay in Russia “without limitation or deadlines”.

Until now, they could only officially stay in Russia for 90 days in a 180-day period. For longer stays, it was necessary to obtain a work permit or a special authorization.

The persons concerned now have “the right to carry out a professional activity in Russia without a work permit”, specifies the decree.

However, to take advantage of this measure, they will have to submit to a fingerprinting, photo ID and drug and infectious disease screenings.

The text also prohibits the expulsion from Russia of Ukrainian citizens, apart from those released from prison or deemed to threaten the security of Russia.

According to Moscow, 3.6 million people, including 587,000 children, have fled Ukraine for Russia since the Kremlin’s large-scale offensive against Kyiv in late February.

The Russian authorities encourage these trips and have opened accommodation centers throughout the country.