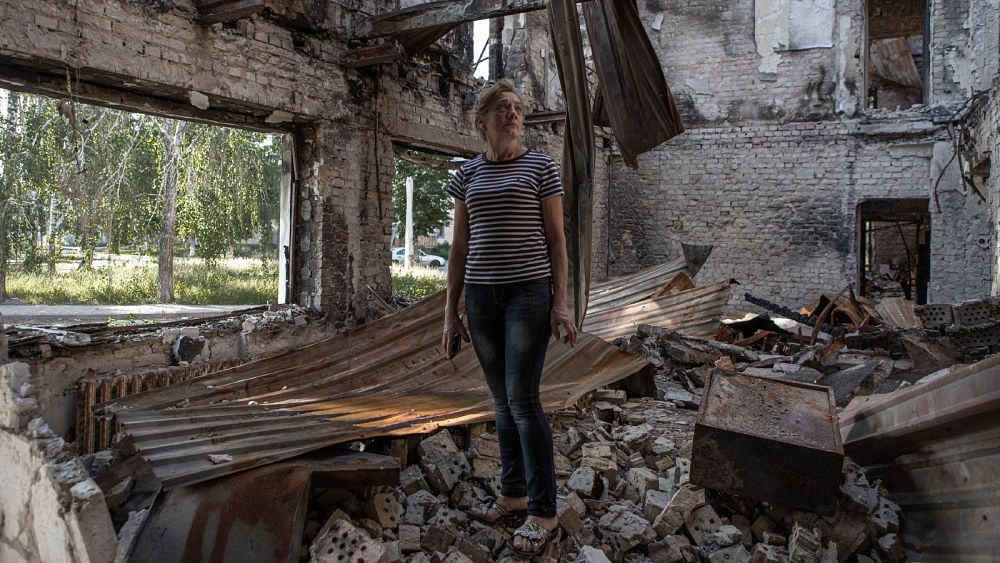 On the outskirts of Kyiv, vegetation grows unchecked and the cats run wild.

Up until six months ago — when the first Russian troops landed at Antonov Airport around a kilometre and a half away — the brick buildings of Proskurivska Street in Hostomel evoked idyllic postcards of an orderly and peaceful world.

Now, only naked structures remain. Inside are piles of rubble. Something rots, hidden underneath.

The cats no longer belong to anyone. They roam hungry and lonely, approaching anyone who comes to contemplate what is left of the neighbourhood.

One of them is Lyudmila Holovienko.

The 55-year-old’s apartment in Proskurivska Street was burned down in late February, in the early days of the invasion.

Now, she wanders the deserted street that had been her home for 35 years.

The three-storey property that housed her apartment, which dates from 1936, had endured Nazi occupation but didn’t survive the Russian invasion.

Hostomel was among the first towns occupied in Kyiv’s suburbs, along with neighbouring Bucha and Irpin, the scenes of alleged civilian massacres.

Street-by-street battles broke out in Hostomel, forcing many residents to flee. Those that stayed hid for days or weeks in cellars without heating, gas or electricity.

Volunteers who tried to bring them food and medicines came under gunfire, said Lyudmila, and the town’s mayor, Yuri Prylypko, was killed in early March.

Lyudmila was not at home when her property burned down, instead living with her ill, bedridden mother a few kilometres away, a decision that would save her life.

It was there that she heard the first noises of the invasion.

“I thought it was a gas tank from our neighbours,” she said. “And then three hours later, everything started: planes, smoke, shooting. It was just such a horror.”

If losing her home wasn’t enough, in April, she lost her mother. She was 86.

“She didn’t survive it all, the cold, the hunger,” Lyudmila said. “As long as I live, I’ll remember it all for the rest of my life.”

Just a few months earlier, Lyudmila had lost her daughter, who died from cancer, aged 32 — on New Year’s Eve.

In August, six months since the war began, Lyudmila is back at her late mother’s property, dishing up a meal of cold salo, chicken dishes and fresh pickles.

Next to Lyudmila are her young niece and daring 75-year-old aunt, who faced Russian soldiers when they knocked on her door in search of men, food, and weapons.

The trio, along with Lyudmila’s uncle, sheltered in their house during the occupation.

The broken roof and damaged windows left by the explosions have since been fixed, but the glass has been taped over in the shape of an “x” as a precaution.

Now a quiet sense of normalcy has set in, but the wounds and painful memories linger.

Lyudmila does not know what will happen with the reconstruction of Hostomel and the rubble inside her building remains untouched.

With the fear of a strong winter ahead, she must prepare for what is to come.

“I’ll come back here, I want to live here, I like it here, everything is native here,” she said of Proskurivska Street back in June, her voice trembling.

“We all just got hurt, all of us. Every family has grief, misfortune. It’s just awful.”