A video from the scene of the fatal car accident that killed a woman while allegedly chasing her husband after she spotted him with another woman has been shared online.

It was earlier reported that an unidentified woman reportedly lost her life in a car crash in Calabar, Cross River State while allegedly chasing her husband, whom she saw with another lady at a shopping mall.

It was said that the deceased, a mother of three, sighted her husband leaving a shopping mall in the company of a lady and she tried to block his car with the Toyota Highlander she was driving in.

Her husband reportedly managed to get his vehicle out of the attempted blockade and took the Murtala Muhammed highway, with his wife in hot pursuit.

In a bid to outrun her husband, she lost control of the speeding vehicle, veered off the road and slammed the car on a tree, killing herself.

“Let us pray for the repose or healing of her soul first. To be honest ,not everyone has emotional capacity. To stand emotional stress they are served.

The one thing you must always pray for as a woman, is wisdom. Wisdom is profitable to direct. Wisdom will make you emotionally mature. I feel for the children ,all three of them. I honestly do.” she captioned the video. 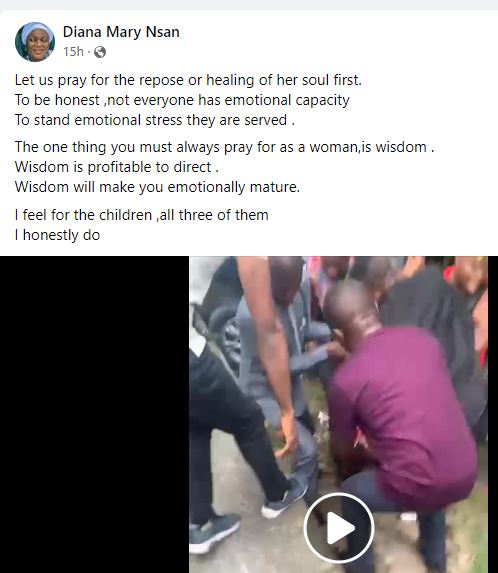 but she was said to have died few minutes later due to the injury sustained from the incident.” Hassan added.